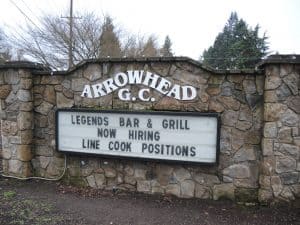 Arrowhead Golf Club is an 18-hole private course near the small town of Molalla, about 25 miles southeast of Portland.  The course has a modern, but rural feel. Modern because it is well cared for (including excellent greens) and has a variety of holes. Rural because of its surroundings, an abundance of tall trees, and a relaxed feeling. It is slightly short, but the well-placed traps (particularly on the front), abundance of trees (making some holes narrow), smattering of water (including the Molalla River), a few doglegs, and the undulating greens make the course play longer. Very good practice facilities, welcoming members, and a very friendly and accommodating staff. The course is flat and provides a nice walk.

The course has been a family affair from the start. The first 9 holes opened in 1961, and the second 9 opened in 1966. They were built by the original owner, designer, and operator, Gilbert “Kip” Kappler, who opened the course as a public course. In 1972, Mr. Kappler sold the course to Joe Clarizio and his wife, Jean.  Joe had worked at the course since 1964. The Clarizios made the course semi-private. In 1981, as the new clubhouse and athletic club (indoor pool, weight room, raquetball courts, cardio room, and locker rooms) were being completed, the course became a private course. In the 1990s, renovations were made to the course designed, by Mr. Clarizio’s son, JD Clarizio. A substantial remodeling occurred in the late 1990s and early 2000s by Craig Schreiner.

In 2015, the course was sold to the Fisher family through its LLC (which also owns gas stations, car washes, and convenience stores). Howard Fisher worked as an assistant pro at Arrowhead from 1971 to 1976. Marcia Fisher is a seven-time Oregon Women’s Amateur Champion and PNWGA Hall of Fame member who took lessons from Mr. Clarizio while on the Molalla High School boys’ golf team. The Fishers’ children, Stacie, Bryce, and Robert, are involved in the day-to-day operations.

The course has hosted several OGA events as well as the 2015 Sectional Qualifier for the U.S. Senior Open. In 2017, the OGA named the course its Facility of the Year. 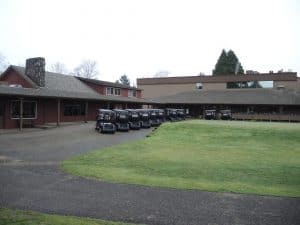 Mr. Kappler wanted to build a course on a dairy farm in southeastern Clackamas County. The course has continued through the efforts of the Clarizio and Fisher families.

There is minimal yardage information, so take a range finder (even if you have to rent one). By and large, the course is in front of you, but there were a couple of places where experience would have been handy. On the par-4 6th hole, you drive with a pond on your right towards an elevated green that is guarded on the left and center by a large tree and then two traps. If the pin is set to the left, best to challenge the pond and favor the right on the tee shot. On the par-5 10th hole, after you make the turn on this dogleg right, there is a creek, which is about 100 yards from the slightly elevated green.  Unless you can reach the green in two, leaving your second shot short of the creek is not a bad option. On the par-4 17th hole, which has the Molalla River up the left side, from the tee it feels like a risk-reward hole (wanting you to clear as much of the river as possible). But there is plenty of fairway on the right. And almost all the greens are multi-level or undulating, and are quick (even in the winter) and true. No need to over-read or be aggressive on your putts.

New owners Howard and Marcia Fisher were married in 1974 and spent the first year of their marriage living above what is now the course’s Legends Bar & Grill (then, the Farmstead Restaurant). In addition, the course pro, Rob Gibbons, is Mr. Clarizio’s stepson.  He played on the course as a child, worked at the course since the 1970s, was the Oregon PGA Player of the Year in 1988 and 1990 (and Senior Player of the Year in 2015), and had a part ownership interest in the pro shop that he sold to the Fishers.  As a freshman, Mr. Gibbons was on the Molalla High School Golf Team whren Mrs. Fisher was a senior on the team.

For a private club, they do a lot to encourage non-members to play. In the summer, they have twilight golf specials involving golf and dining to encourage women (including non-member women) and couples to play. They hold junior golf camps for members and non-members (ages 7 to 17) and they are the home course for Molalla High School. They host the Ralph Capasso Memorial Golf Tournament (named after the longtime Molalla High School golf coach) to benefit the Molalla High School golf teams. Since 1967, the course has hosted the Molalla Buckaroo Golf Tournament, inviting all the participants of the Molalla Buckaroo Rodeo. The course also hosts the OGCSA Crew Tournament, where all courses in the state are invited to send their maintenance crew members for a day of scramble golf, refreshments, and prizes. 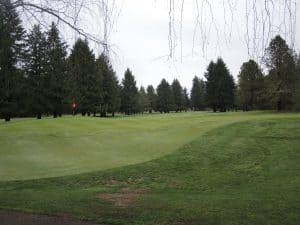 An attractive and well-maintained course that has interesting holes and a rural feel. In addition, the practice and athletic facilities are solid, the members are friendly, and the staff is welcoming and accommodating (and the restaurant looks great). For the price, it’s very inexpensive for the Portland metro area and should be considered a place to join.