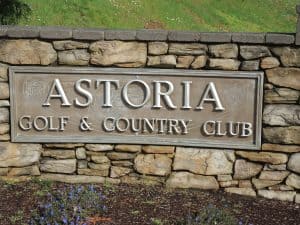 Astoria Golf and Country Club hosts a private 18-hole course south of Astoria. The course is a wide-open and very-well-maintained coastal course, where you never see the ocean.  A links course in a park-like setting, the course rolls over grass-covered sand dunes and has a smattering of beautiful old shore pines. Although there is some water and traps on each hole, the main issues (other than the weather) are the doglegs and the occasional steepness of the sides of the holes. Astoria Golf and Country Club has a great practice facility, and very friendly staff and members. Forward tees generally improve angles and distance. Although rolling, it is a nice walk.

Opened in 1924. Although several publications attribute the original design of the course to the first club president, C.W. Halderman, Mr. Halderman, in a letter to The Oregonian, stated that the design was provided by R.C.F. Ashbury. The original course layout was east to west across the rolling dunes. This design quickly went out of favor and a subsequent remodel was done by the course’s first superintendent, George Junor, routing the holes north and south. It has experienced a number of injuries over the years, with the 1967 Columbus Day Storm blowing down a majority of the trees, and the clubhouse burning down in 1968 (the new one was completed in 1970). It has hosted many a state tournament over the years, including the Oregon Amateur (1949 and 1958), and the Oregon Open (1968, won by Pat Fitzsimons). It has also hosted the Oregon Coast Invitational (fka the Oregon Coast Tournament) from 1937 to 1941 and since 1951. In the 1950s, this tournament was known as the largest match play tournament in the country. GolfWeek has named the course one of the top 100 Classic Courses in the United States. In 1999, The Oregonian named the 14th hole as one of the best holes in the state. 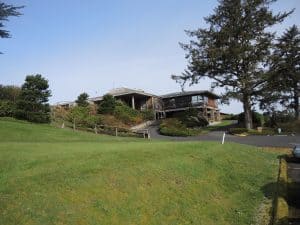 The club was founded in 1923 by a group of locals and some Portlanders who wanted a private club in the area. They then purchased the property owned, in part, by a cranberry company, and built the course.

On the “valley” holes, 3 and 15, do what it takes to keep it in the fairway. The sides look high, but they are easy to slice/push/hook/pull over. Once on the other side of the berm, it’s not easy to accurately return.

Your round will be weather dependent. An example of this is the 1956 Oregon Coast Tournament, which was enjoying a sunny day when a storm slammed into the area. There were multiple stories of what happened next, but just to mention two: a player on the 14th green had to chip his ball to the hole because of a river that had formed (he hit it thin and it went OB), and a player lost his grip on his driver when teeing off on the 5th hole and it went into a lake (a local with a row boat fished it out for him).

The drainage system collects water, which is then used for irrigation. Only organic pesticides and fertlizers are used. They are the teaching course for all the local high schools (Warrenton, Astoria, and Seaside), and hold summer clinics for member and non-member juniors. They hold many charity events including those for the Providence Seaside Hospital Foundation, the University of Oregon Foundation (with a tournament called “Ducks on the Beach”), and for local high schools. 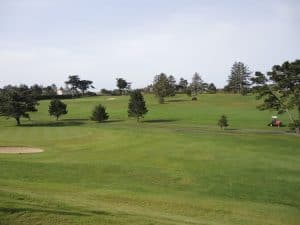 An attractive and well-maintained historic course that one should play if given the chance. Why you should become a member of the club is because it is probably one of the best bargains for a country club, given the fees and dues, compared with the quality of the course, practice facilities, and rights associated with membership.