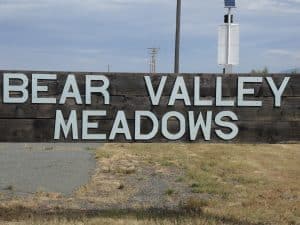 Bear Valley Meadows is a 9-hole public course is just off Highway 395 in the town of Seneca, between John Day and Burns. The area is the highest of the High Desert in Oregon. The area around the course is mostly fields and sagebrush, but off in the distance are pine covered hills. The course is the epitome of a pasture course that you may have played in the 1800s. Long, mixed-grass (and weed) fairways with animal holes and burned-out and bare areas leading to unrolled greens that are just short-cut fairways and unputtable. Tee boxes may be missing on some holes (although there is a dual-tee system to make the course 18 holes).  The design of the course is interesting as it crosses Silvies River several times, and several holes have willow bushes in play. But fairways of several holes merge, and you need to be careful of routing. No pro shop; just deposit green fees in the honor box and play. Very flat and compact, easy walk.

Opened in 1996 on property that was part of the Edward Hines Lumber Mill and then used briefly by the City as pasture before The City turned it into a golf course. 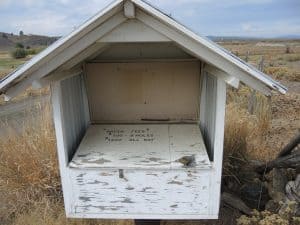 The City of Seneca wanted to have a golf course and built one.

The grass in the fairways is so long and the greens so irregular, it is easy to misplace your ball. Play with a friend and watch where each other hits. Except for one 150 pole, there is no yardage information, so make sure you have a range finder. On the par-4 9th hole, you drive over Silvies River, but then two small creeks (or, if dry, green swales) cross the fairway. Unless you feel confident about driving over both, hit short of the first one (avoiding the bushes) and hit on from there.

Seneca is a nice small town in the high desert. It has been called “the icebox of Oregon” because of how cold it gets in the winter. Indeed, the coldest temperature ever recorded in Oregon was in Seneca at 54 degrees below zero  in 1933.

The town treats the course as a true pasture course; no chemicals are used, and even in the hottest season the course will be watered only once a week. 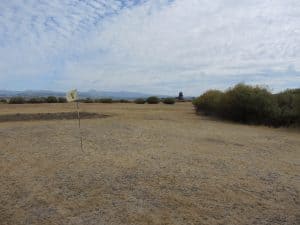 I imagine that the course might reflect course conditions that existed in the mid-1800s (just pull out your featherie or guttie). If so, it is the only one of its kind in the state. Otherwise, you play the course because it is the least expensive legitimate-length 9-hole course in Oregon. Or you play it because you want to play all the courses in the state.