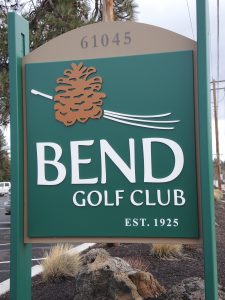 Bend Golf Club is an 18-hole, well maintained and attractive, private course in Bend. The fairways are very well groomed and the greens hard, fast (but not unfair), and true. Although not as narrow as it used to be, Bend Golf Club has lots of challenging holes. Trees (primarily large old Ponderosa), elevation changes, and turns are the primary issues. But there is also a liberal use of sand, the occasional basalt/sage outcropping, and several holes with water. Several holes also provide great mountain views. An attractive clubhouse and very nice practice facilities (including a 280-yard practice hole). Nice members and very friendly staff. Forward tees provide a reduction in distance and better angles. Rolling but compact, a nice walk.

The first 9 opened in 1925 with dirt fairways and sand greens, on property donated by Brooks-Scanlon Lumber Company. It was originally called Bend Golf Club. Most have the original designer as Chandler Egan (which I will go with), but newspaper reports at the time attribute the design to Bill Henley (then a pro at Waverly CC). Turf was introduced in 1927. In 1948, Brooks-Scanlon donated an additional 309 acres and in 1973, the second 9 was opened. Although the course had been referred to as the Bend Country Club since the 1950s, in 1981 it was renamed the Bend Golf & Country Club. William Robinson did a remodel in the 1990s. Dan Hixson did a remodel in 2013 (he purportedly removed over 200 trees). In 2018, the name was changed back to Bend Golf Club.

The course has hosted the Oregon Amateur in 1978, 2008, and 2018; the Oregon Open in 1947, 1948, and 1975; and the Equitable Savings Northwest Open in 1980. The course has served as a qualifier course for USGA events, including the U.S. Open. A Pro-Am preceding the Fred Meyer Challenge was held there allowing many of the greats of golf (including Sam Snead) to walk the fairways. Since 1950, the course has hosted the Mirror Pond Invitational. In 2018 Scott Moffenbeir was the OGA’s Superintendent of the Year. 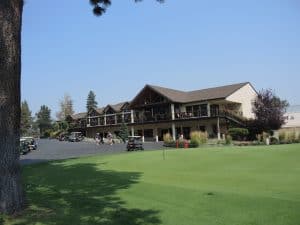 Many local businessmen and golfers wanted a good local course course.  With the closing of the previous Metolius Golf Course (which may have also been known as the Central Oregon Golf Club), the donation of former timber property allowed the course to be built. It was originally south of Bend, but is now surrounded by the city and has a solid membership.

On the par-4 8th hole, a dogleg left with your approach shot over a pond, you want to drive to the 150 pole — too far and you may be blocked by trees, too short and the pond becomes bigger. On the tree-lined, dogleg right, par-5 9th hole, note the placement of your second shot as trees pinch both sides of the green as you approach (center of the fairway at the turn is a good thing). And on the long par-4 17th hole, you drive up over a crest, where the fairway turns slightly left and drops.  From the tee, the mounds you see are in the center of the fairway. A drive over or slightly left of the mounds is a great place to be. Note that this green may be the only green that runs away from the fairway (almost all others are back to front), and the fairway may be hard in front of the green as well.

When it was a nine-hole course, the club used slot machines to finance operations and improvements and was provided needed additional financial support when it allowed soldiers from nearby Camp Abbott to play the course during WWII. In 1966, the cast of “The Way West” including Kirk Douglas, Robert Mitchum, Harry Carey Jr., and Sally Field played multiple Oregon pros in a charity event for Deschutes County Chapter of the American Cancer Society.

They hold weekly clinics in the summer for juniors (including some free clinics). They are the home course for Bend High School. 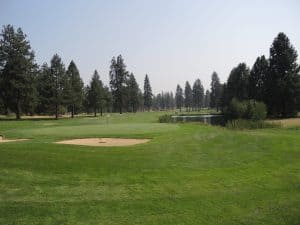 A very attractive, and very well-maintained course that is challenging but fair, and with tees that can accommodate multiple skill levels. It has great practice and club facilities (including indoor and outdoor tennis courts, indoor pool, and two workout rooms). A very nice staff and down-to-earth members. A delightful place to play if you get the chance.