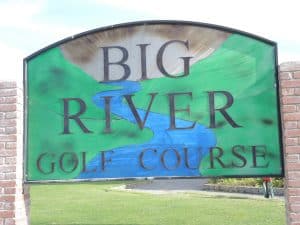 An 18-hole municipal public course in Umatilla, about 40 miles northwest of Pendleton, where some holes provide you with a view of the Columbia River and McNary Dam.  Big River Golf Course is unusual in so far as the first three holes are all par 3s, followed by two par 5s. The back 9 is materially harder and longer than the front. Overall, the course is flat and park like, with trees being the main issue – some encroach the fairways and some are in the middle of the fairway, blocking the green. There are a few traps and some doglegs as well. Mixed fairways are well maintained but have bare spots. Greens are often small and mounded but hold well and are pretty true and consistent. Forward tees provide shorter distances and better angles. Flat and compact (although the hole routing can be confusing), it is a nice walk.

The first 9 opened in 1948 as a member-owned semi-private course called McNary Golf & Country Club. The second 9 opened in 1968 (designed by the members) and re-opened as Umatilla Golf Course. At some point thereafter it was sold  to Jerry D. Smith, who changed the name to McNary Golf Course and made it public. In 1985, the Farmers Home Administration foreclosed on the course and sold it to a company held by A. Larry Grayson (who also owned the neighboring hotel). Dale Miller subsequently bought the course from Mr. Grayson’s company, and in 2007, Big River Golf Club LLC purchased the course and changed the name of the course to Big River. In the early 2021 the City of Umatilla purchased the course (and its water rights). 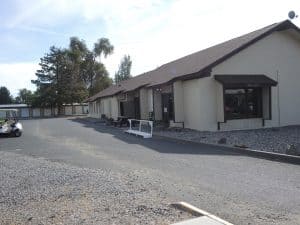 Built by the Army Corps of Engineers during the construction of the neighboring McNary Dam.  When the City bought the course, it stated that it wanted to “ensure this community amenity will remain for generations.” Let’s hope that stays true.

Holes 8 and 18 both have trees in the middle of the fairway guarding the green. The trees are about 80 to 100 yards out. If you want to avoid hitting a punchshot under the tree, hit your tee shot to about 120 from the green and hit over the tree (although note the drop off in the back of the 18th green). Hole 17 is a long, tree-lined, par 4 with a sharp dogleg left. The dogleg is at about 175.  If you can’t drive it that far, pick a spot with a break in the trees left and hit your second shot over the neighboring property.

A big wind storm struck the course in 2014 knocking down many trees. As the crew was carving up tree trunks to remove one of the downed trees, they found a golf ball that a trunk had totally grown around.  PGA and Senior PGA pro Ben Crane holds the course record for juniors.

The course hosts a week -long junior camp put on by the local Parks and Recreation. It is the home course for Hermiston High School. The course hosts high school cross country meets. They also annually host a slew of benefit tournaments, including one for the MeadoWoods Springs Camp for children with social learning and communication challenges. 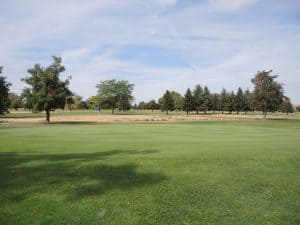 A good course at a reasonable price that has a nice community following. Seeing the Columbia and the dam, together with the nice staff and starting with three par-3s, are pluses.