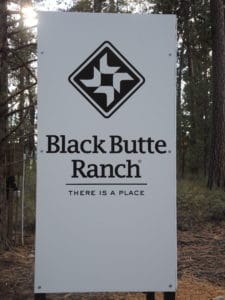 Big Meadow is one of two 18-hole public resort courses in Black Butte Ranch just outside of Sisters in the Central Oregon Cascades. “Big Meadow” is a bit of a misnomer, as only four holes (and the practice area) play in a meadow. The rest are lined with tall Ponderosa Pines with the occasional Aspen grove. A nice mix of holes, with the shorter holes having doglegs and being narrower. Like its younger sister course, Black Butte Ranch Big Meadow has beautiful vistas of the Cascades.  A bit more forgiving than its sister course (larger driving areas and a little less hilly), it has tall trees and lots of traps, both in the driving areas and around the greens. Well-maintained fairways (although spotty on some holes) and good greens that hold well and run well and true. Forward tees provide shorter distances and better angles. It is a little rolling, but walkable.

Opened in 1972 on the former Black Butte Cattle Ranch by a subsidiary of Brooks-Scanlon Lumber Company. It went through an extensive remodel in 2007 that added some 65 bunkers and mounding near the greens. It has received several awards including being listed on GolfWeek’s 2013 Best Places You Can Play. Hosted the Oregon Open in 2001 and 2004. Was the 2016 OGA Club of the Year.

Built as part of the Black Butte Resort. 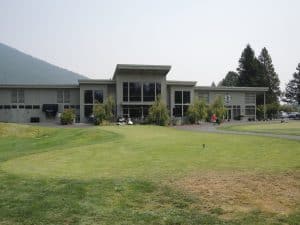 There are a few holes where prior play might be of help. For example, the par-4 9th hole is a dogleg around a large trap complex. It is a risk-reward hole, where clearing the traps on the left requires drives to about the 150 mark. The green on the uphill par-3 13th hole is two-tiered; make sure you stay below the hole. On the short, narrow, slight dogleg par-4 15th, the fairway opens a bit after the 150 mark (but if you challenge the elevated green, there are three large traps in front).

The 2017 Mill fire came close to the course. You can see replanting in a portion of the burn area off the tee of the 7th hole.

They conduct a Ladies Only school over the summer. They also conduct 2-day junior camps in the summer, and participate in SNAG (Starting New At Golf), introducing golf to elementary school kids. Ponds next to the fairway on the 11th hole are collection ponds that are used for irrigation. The course has a six-foot buffer zone around water areas. Use of chemicals is done with a minimalist philosphy, frequently taking soil samples to insure minimal effect from operations. Put up owl boxes in part to control burrowing animals. Donate carts to the City of Sisters for its annual quilt show. 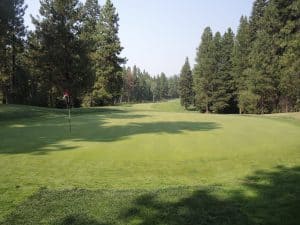 Like its sister course, it is a well-maintained, very scenic course in a stunning setting, with a nice mix of holes. With larger landing areas, it is a bit more forgiving than its sister course, but it is much harder than a typical resort course. The warm and friendly staff that works to be family friendly is a plus,