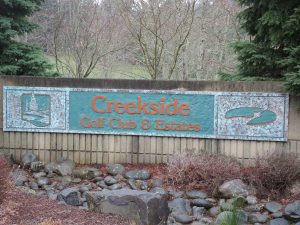 The public can play this course just south of Salem, and it is not closing anytime soon. Resting in and around a wide valley with three creeks (Battle, Jory, and Powell), Creekside Golf Club has the feel of three different courses: some holes are lined with houses, some holes are in a meadow, and some holes are tree-lined. The result is an attractive,18-hole, semi-private course with a varied hole design — long, open par 5s where you can bomb away and short par 4s with trees, turns, water, and traps. With the three creeks, water is the primary hazard, touching 13 holes, but there are many traps and trees hanging over edges of the fairways. It is a challenging course that is rarely unfair. Well-maintained fairways and (often small) greens. A very nice staff and members. Forward tees provide shorter distances and better angles. Course is rolling, but with some effort you are provided with a rewarding walk (with glancing views of Mt. Hood and Mt. Jefferson).

The first 9 (the back 9) opened in 1993 and the second 9 opened in 1994 on a former Christmas tree farm. Opened as a public course, it became private in 1997. In 2016, certain tee times became available to the public. It was built by Larry Tokarski through Mountain West Development.  In 2002, a portion of the ownership interest was sold to Terry Kelly, and significant improvements (in particular, improving drainage) were made. In the mid-2010s the owners proposed converting the course to a 354-unit housing development. Local homeowners took the course owners to court, but lost in 2017. Fortunately, the course owners then reached an agreement to retain the course through a combination of becoming semi-private and increasing dues. The course hosted the Oregon Open in 2000, the Oregon PGA from 1995 to 1998, and the NAIA Championships in 2012 and 2013, and was a qualifier course for both the US Amateur and Senior US Amateur. When it opened in 1994, GolfDigest named it as one of the top new courses in Oregon.

Developed as part of the Creekside Estates. Thanks to local homeowners and the course owners, the course remains open and available to all. 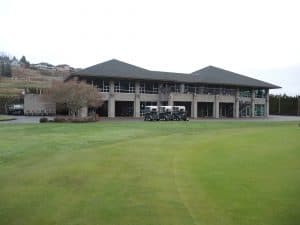 Some holes (particularly 2, 5, and 16) may need a few plays before figuring out the best line. Hole 2 is a short, tree-lined par 4 with a hard dogleg left. The turn (to the green with a creek behind) is before the last group of trees on the left. Hole 5 is a short par 4 with a bit of everything. As you drive over the creek, there are traps right (you can’t see them all) followed by a tree that would block your next shot. But straight away there are traps you cannot see, then trees right of the traps, and then a creek right of the trees. Aiming for, but not quite getting to, the trees slightly right may be the best line before turning right and seeing the elevated green beyond a creek that you cannot see. On the par-4 ninth hole, the fairway drops and turns right at about 150. Driving up the left side might give you the best bump forward if you reach the hill. On the short par-4 tenth hole, which crosses a creek on the drive and again on the approach, staying right on your drive (avoiding the traps right) will give you the best chance to avoid the trees left and reach the green in two.  And on the par-5 (4 for women) 16th hole, there is a blind tee shot up a tree-lined hill. Stay to the right side of the three tall fir trees off in the distance to avoid water left, but don’t go too far right as there is a complex of traps on the right side. Also, note a significant ridgeback in the center of the 16th green and try your best to send your approach to the same side as the flag. Note also that the forward (burgandy) tees are in-ground, generally in the center of the fairways.

When the clubhouse opened in 1996, it housed the offices of the OPGA.

To encourage women to play, the women’s club holds “Chicks and Sticks” events — a cocktail social followed by a lesson and course play. Host course for PGA Junior League. The course holds an all-summer-long golf camp for juniors (including non-members) with lessons one hour each week and play days. Home for South Salem High, Corban College, and Willamette University. Has no-chemical buffer zones around the creeks.  The women’s club hosts a Cancer Awareness Tournament, and the course hosts an annual tournament (and concert on the range) to benefit St. Jude Children’s Research Hospital.

An attractive and well-maintained course with a variety of holes that keeps your interest. Challenging, but rarely unfair, five sets of tee boxes allow play by a wide variety of skill sets. With nice staff and good practice facilities, the course provides an overall solid golf experience at a reasonable price.