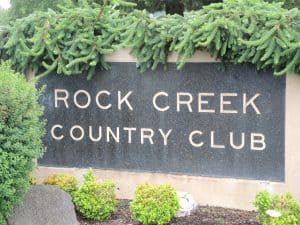 A pleasant and private 18-hole parkland course that is too often forgotten as an alternative country club in the Portland area (probably because of the powerlines that dominate the practice area, but only come into play on one hole).  Just over the West Hills from downtown Portland, the Rock Creek Country Club is part of a subdivision – with houses on almost every hole (always on the left, to make them safer from the slicers). Fairways are mixed but well-tended, and the greens hold well and are fair and consistent (and almost all are slightly elevated). Bunkers, some water, and some doglegs help with the challenges. A nice mix of mature trees line the holes, but are mostly limbed-up to allow some progress in recovering the errant shot. Holes are much more interesting on the back side (so don’t get complacent if you score well on the front). A relatively flat course that is surprisingly compact within a housing development. A nice walk.

There is conflicting information about the original opening date and original course architect. Some websites have the course opening in 1958, and the course has it as 1962. Based on newspaper stories at the time, it appears that the club was formed in 1962 and that the first 9 holes opened on June 1, 1964.  There is a consensus that the second 9 (now the front 9) opened in 1968.

There is also some confusion as to who designed the course.  Longtime locals say it was Tom Bartol. Some websites have it as William Sander (who designed Bayou GC).  Other publications have it as George H. Otten and George W. Otten. I tend to favor William Sander because he was an active designer at the time and the others do not appear to have been (George H. having done most of his course design work in the 1920s).

The course opened as a public course.  In 1975, the course was sold to Moschetti Corporation, who took the course private. The Moschetti Corporation was made up of Will Moschetti, Ken Harris, and Rex T. Barber.  (Rex Barber was a WWII hero who has a bridge named after him on Highway 97.) Soon thereafter, possibly as early as 1977, the club was sold to the Gabriis family.  In 2001, the course was sold to Louis J. Zimel, first through his company, Portland Fixture and then through Rock Creek Country Club, LLC. In 2008, Lou’s son David, requested that Washington County remove the open space overlay on the course, which would be an initial step if the owner wanted to increase housing in the area. In response, the residents organized, packed hearings, and wrote letters to county commissioners. Eventually, Zimel withdrew the request and the course has continued with the Zimel’s making significant capital improvements to the course and its facilities..

The course hosted the Oregon Open in 1980 and has hosted a Metro League event since the 1980s. 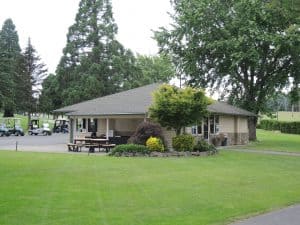 Built as part of a residential subdivision by Park City Corporation. After an interesting ownership history and protection by the member/residents, the course has a steady membership.

The shorter holes are tighter. No need to bomb it off the tee to score well on those holes (you will have more open landing areas on the longer holes). Note the slight fairway rises, particularly on the 5th, 11th, and 18th holes, as you might need an extra club (some rises are more noticeable, such as on the approach at 17). Pretty much everything is in front of you. But I will note that on the par-4, 14th hole, which is a downhill sharp dogleg left, you need to drive it to the 150 pole (or, if further back, further right) to have a clear shot to the green.

The course holds junior programs for members and non-members including a week-long summer camp and weekly clinics. The course has family tees with a separate scorecard.  The course donates to the Evans Scholarship fund. The course is the home course for Westview and Liberty High Schools.  The course hosts women’s clinics for members and non-members.  Ponds on the course are collection ponds used for irrigation.  The Rock Creek Regional Trail wanders through a part of the course. The course annually holds a number of charity events, including the Craig D. Wiesberg and Calvin P. Ranney Children’s Foundation Golf Tournament to help pay medical bills for children in need, and events supporting Beyond Victory Ministries and Glencoe Football. 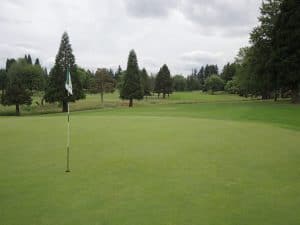 A pleasant course that is well maintained, with some interesting holes and a great staff. As a club, it is affordable, and the membership is active, friendly, and cares about golf and the course (I saw more divot and ball mark repairs than I have seen on any other course – a sign of great course appreciation).