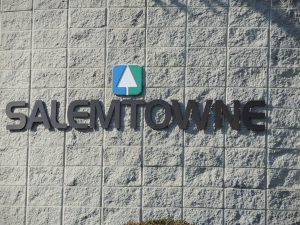 Thie Salemtowne Golf Course is a 9-hole private executive course in an adults-only subdivision in Northwest Salem.  (Non-residents over 50 can become members.) The course essentially has three short par 4s (the longest is 286; the blue tees have an additional par 4 and the red tees have a short par 5) and the remainder are par 3s (125 to 169 yards). Every green is raised and has at least one bunker next to it. Most holes are pretty open, and although houses line almost every hole, trees and distance generally prevent them from coming into play. Although the fairways and greens are mixed, they are well tended. There are some very nice trees and you do get the occasional glimpse of Mt. Hood and Mt. Jefferson. There are some distances between holes, but the short course is a nice walk (and you can use the funicular).

Opened in 1967 on property that was formerly an orchard. The development (and course) became subject to financial difficulties and was placed into receivership in 1972. During this period, the local residents volunteered and maintained (thereby saving) the course. Eventually, the community association became the owner of the course. 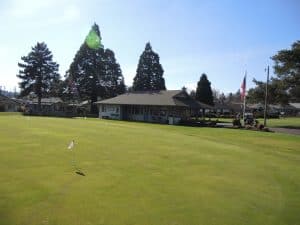 Built as part of the Salemtowne housing development by James G. Watts (who built Oregon State University’s Gill Coliseum). The development is modeled after Dell Webb’s “Sun City” complex near Los Angeles. The course is an integral part of the local community, who essentially saved the course in the 1970s.

The green on the 3rd hole is a bit deceiving. The front part of the green rolls away from the fairway and the remainder of the green is much flatter than the back-to-front, right-to-left appearance. Also, on the 6th hole, there is a small pond at the bottom of the hill on the left that you may not see from the tee.

The course has what may be the only ground funicular on an Oregon golf couse — taking players from the 9th green up to the level of the clubhouse. Also the course’s first pro was Charlie Perkins, who was a Major League Baseball pitcher and member of the 1930 World Champion Philadelphia Athletics.

Although there is a paid maintenance crew for the course, there is a strong network of volunteers that work on special projects (e.g., flower beds, benches, clubhouse improvements), maintain an inventory of the identity and health of the trees on the course, and maintain an active list of bird sightings. In addition, the woodworking facility for the community is purported to be the only volunteer shop assisting the Oregon Department of Transportation in maintaining the state’s historic information signs. 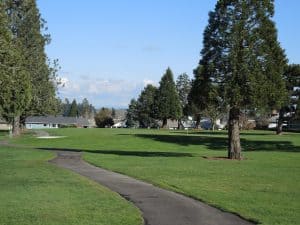 The course is golfer-friendly, short, nicely maintained, and rarely crowded.  The folks in the neighborhood seem pretty friendly as well.  Overall, the course is a good place to relax while hitting the ball.