As you make the turn from River Road in farmland just north of Eugene, you enter a long drive surrounded by newly planted hazelnut trees and approach a large, yet understated, clubhouse with three large gables. The introduction to the private 18-hole Shadow Hills Country Club is one of casual elegance.  And the course may be described as one with comfortable difficulty. It is an attractive and well-maintained course with a nice variety of holes. The six tee boxes (plus the further-forward family tee box) provide the player with options from very difficult to a pleasant but still interesting round. The course has a bit of everything — mature trees of a wide variety, lots of sand (over 60 bunkers with sand on every hole, and next to every green, except 7), some water and a few turns. Greens are generally slightly elevated and back to front, consistent and quick (and for me, hard to hold). Forward tees provide the benefit of better angles and shorter distances. The course is flat and compact, a very nice walk.

Opened in 1962 by Bohemia Lumber Company on former orchard land. In 1986, the course was bought by its then 300 members. Between 1992 and 1995 the course went under a massive remodel by William Robinson, who switched 9s and added traps, mounding, water and a new irrigation system. In 2012, the new clubhouse (with a pool and fitness center) was completed. The course has hosted many OGA and NWPGA events, including the Oregon Amateur in 1974 (won by US Amateur champ Mary Budke), the NWPGA in 1966 and 1972, and the Northwest Open in 1996. It has also hosted a number of national events, including the Pacific Ladies Golf Classic in 1967, the Pay Less Classic from 1968 to 1971, and the Nationwide Tour Oregon Classic from 1998 to 2008 (except in 2001). The club was named the OGA’s Facility of the Year in 2014. 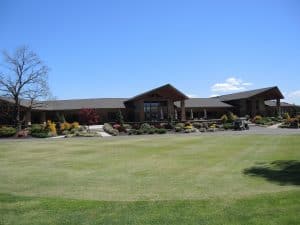 Built as a private course by Bohemia Lumber Company. Now has a strong membership and fan base.

Except on the 7th hole, there is at least one trap behind every green (note where they are). By and large, the course is in front of you and it might be best to lay up on some holes, like the par-4 11th hole (where a trap pinches you towards the water at 106 yards out), and the par-5 15th hole with a sweeping dogleg (where a  trap left pushes you into the trees at about 110 yards out). Two green warnings. On the short par-4 14th hole (with a pond in front of the green), the green is slightly humped — balls in the front will roll towards the pond, and balls long will roll towards the trap in back.  On the par-3 16th hole, with water front and right, balls hit to the right side of the green will tend to roll right (towards the water).

In the 1960s and 1970s, many tournaments were held at the course, and the par-5 18th hole (now the 9th hole) got a reputation. The hole was and is a sweeping dogleg right around a lake that starts in the driving area and goes all the way up to the green. The combination of west-to-east wind and the lake (referred to as “Jack’s Elbow,” not sure for who) would cause many a failure and curses including two years where then local golf-great (and later nationally renowned instructor) Jerry Mowlds took a 10 one year knocking him out of the lead.

The course holds 3-day junior clinics for members and non-members, hosts a PGA Junior League Team, and has family-forward tees with a separate score card.  The course is a Certified Signature Audubon Sanctuary.  It hosts the Oregon Club Spring Scramble (to benefit University of Oregon athletics), and is a participant course for Patriot Golf Day to benefit Folds of Honor (providing educational scholarships to spouses and children of fallen and disabled service-members). 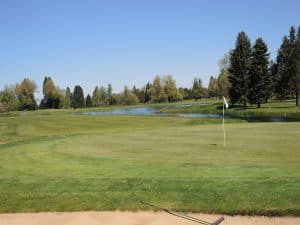 An attractive course in a pastoral setting with interesting and challenging holes that is very well maintained. Include the amazing practice facilities, great staff and friendly members, and why wouldn’t you play the course if you are fortunate to be given the opportunity?