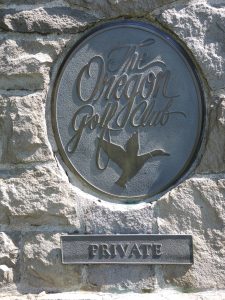 The Oregon Golf Club is a 18-hole private course located in the hills southeast of Portland (just south of West Linn). You turn off of Petes Mountain Road and go down a long tree-lined lane that opens onto an impressive two-story clubhouse with a straight-on view of Mt. Hood and the valley below (with some power lines just off to the side).  The course is built on the side of a hill, so many holes go down and up (and side to side). After being in the open for the first four holes, the course is lined with Douglas Fir trees.  The trees and hills are the primary issues, but there are many traps and there is occasional water (in the form of a lake and several creeks).  Fairways are well maintained and the often undulating  greens are excellent (hold well but are fast and true). The course (as opposed to the practice area and clubhouse) has occasional views of Mt. Hood and one nice view of the Willamette River. Forward tees provide benefit of shorter distances and avoidance of hazards. The course is very hilly; take a cart unless strenuous exercise is your primary goal.

Opened in 1992 on property that was a cattle ranch and Christmas tree farm (and in 1986 was slated to be a garbage dump).  In 1995, Golf Digest listed the course as one of the top 10 courses in Oregon (but in 1994, The Oregonian listed the 9th hole as one of the nine worst holes in Oregon). The course has hosted many tournaments, including the Oregon Amateur (2004 and 2017) and the Oregon Open (2003), as well as a U.S. Open qualifier (1994). The course also hosted Peter Jacobsen’s Fred Meyer Challenge from 1992 to 1997  (so many famous golfers have walked the course). 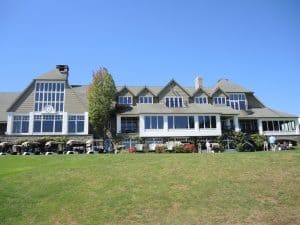 Built as part of a luxury housing development by NW Landmark Corp., a subsidiary of Daioh International, the U.S. subsidiary of Daioh Corp., a  Japanese entity partially owned by Tadamasa Ohno, who attended Lewis & Clark College in Portland. In 1993, Mr. Tadamasa died and the course was sold in 1996 to National Golf Properties, the real estate arm of American Golf, which continues to own the course through a different subsidiary.

A lot, so take a yardage book and study it on each hole.  The holes that have significant uphills to the green play longer than you think (even considering the uphills), but most have up-slopes beyond the greens that will keep the ball in play. Practice playing uneven lies before you arrive. And several greens run away from the fairway (so a bump and run may end up well beyond the hole).

In addition to the golf luminaries that have walked the course as part of the Fred Meyer Challenge, other notable Oregon golfers have worked at the course. PGA Pro Pat Fitzsimons was the club’s first pro. Pro Jeff Fought was an assistant pro at the course for many years in the 1990s. And the first hole-in-one on the course was in 1992 (on the scary 12th hole) by Jim Etzel, who at the time was working for Peter Jacobsen Productions and is now CEO of Sport Oregon (Oregon’s sports economic development entity).

They have installed over 2,000 bird boxes in an effort to have birds return to the course. The lake on the front 9 collects water runoff for use in course irrigation. The course is a Certified Audubon Cooperative Sanctuary. 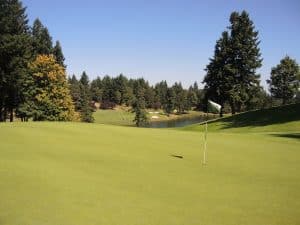 A well-maintained course with great greens and views. The hillside layout provides a series of unique and interesting holes (that may frustrate some but challenge others).