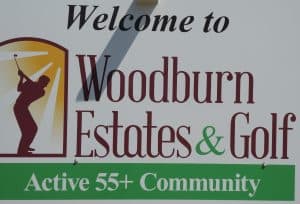 As you drive north on I-5, with the Woodburn Premium Outlets on your left, you catch a glimpse of a golf course to the right. The course is the private, 18-hole Woodburn Estates & Golf. You only hear the freeway on the front side (and it is not too bad) and even though you cross under Highway 214 on the back side, the noise from that highway does not affect the course. The course is short, mainly because the par 5s are very short (but some have sharp turns) and several par 4s are short. There are few traps and no water. The primary defense is the greens: small, elevated and rounded on the front, and small but multitiered on the back. The secondary defense is the wide variety of mature trees that line and/or hang over the fairways on most holes (most are limbed-up, so you can recover, but maybe not as well as you would like). Although short, the greens, trees, and turns will boost your score if you take the course for granted. Very well maintained, with fairways that are uniform in cut and grass, and greens that are consistent and reasonably fast, but still hold well (most are tilted toward the approach). As it is part of a development, houses (or the freeway) line almost every hole behind the trees. There are some distances between holes, but the course is flat and an easy walk.

The first 9 opened in 1961, and the second 9 opened in 1965. The front 9 was placed next to the freeway to provide a noise buffer for the homes. The course originally opened as “Senior Estates Golf Club,” but has gone through a variety of name changes over the years, adding or subtracting the words “The,” “Woodburn,” “Country,” and “Senior.”

Built as part of the Senior Estates housing development by mostly Portland businessmen, including George F. Brice, Jr., Leo Rush, D.A. Clark, and George Marshall. The development was built as an affordable community with upscale amenities. When it opened, it was said to be the state’s only planned retirement community with individually owned homes. The development was so successful that it doubled in size in 1964-65, going from about 1,500 houses to over 2,500.

Your approach shots need to be slightly different on the two sides. On the front, the greens are mostly small and mounded, with drop-offs on the sides. Putting your ball in the center of the green is a great way to go. On the back, the greens are mostly tiered, some severely. You should try to get the approach shot to the correct tier. And the trees and turns require a bit of thought. On the 4th hole, a short par 4 with a dogleg right at about 75 yards, don’t drive the ball too far as there is a willow that guards the left side of the green. On the par-4, 7th hole, a tree hangs over the fairway at the turn about 105 yards from the green. Best to play up the left side to have a clear shot. On the short par-5, 17th hole, the dogleg comes on the drive. You can either hit straight away about 130 yards, or cut the corner by going over the pine (but if you hit it too far, you can still go through the fairway). And on the 4-par 18th fairway, there is a grass ditch that crosses the fairway at about 200 yards that should be avoided if you want to get on in two.

The course has had an interesting group of pros: Ralph Coleman was the head coach of the Oregon State baseball team before becoming the pro in the 1960s; Jim White was the pro for many years and his daughter, Jerilyn White, was one of the best junior golfers in the state and a star at University of Oregon; Chuck Siver was the original pro at the OGA course (around the corner); and the current pro, Jason Hoth, came from Torrey Pines in Southern California. 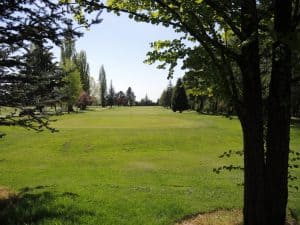 It is a well-maintained course that is fun for multiple skill levels (if you are a big hitter you can try to reach the 5 pars in two and several 4 pars in one — just don’t break any windows). In addition, the staff is very accommodating and the members seem like a good group of folks.